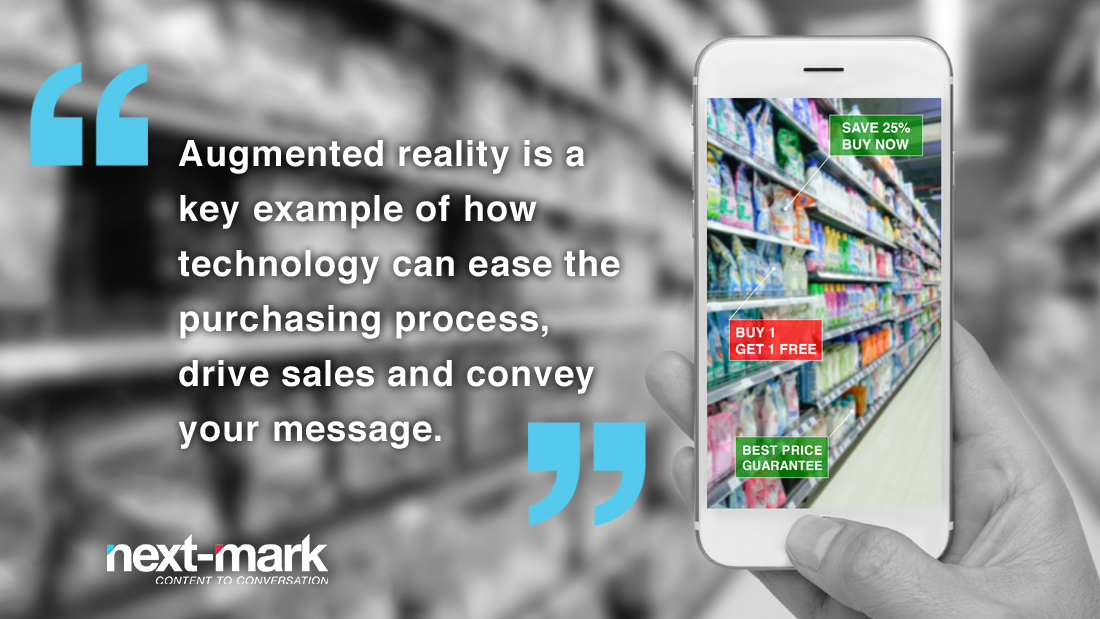 What if your ideal consumer was able to interact with your product, marketing material and content – all in real time? Augmented reality is enhancing customer interaction in ways that have proven to be both effective and lucrative.

Let’s explore the fundamentals of AR and how it can be used to bolster digital marketing and communications.

While virtual reality diverts us from our world, augmented reality digitally enhances it. Users enter the realm of VR by wearing a video headset equipped with technology that creates a computer-generated simulation. While immersed in VR, you can explore space, float above the New York skyline, become a soldier on a battlefield and experience thousands of other scenarios — all from the comfort of your home. (Read our recent blog to learn how companies are engaging consumers with VR).

Augmented reality, on the other hand, integrates or “layers” digital enhancements on top of the user’s real world experiences. It is considered more accessible to the average consumer, as it can be accessed via smart phones, tablets and laptops.

Not surprisingly, many companies realize the potential of this technology and have since incorporated it into their marketing strategies. Pepsi Max won awards for its creative implementation of augmented reality in its Unbelievable #LiveForNow campaign, which turned a tedious bus stop into a visual adventure. Space ships appeared in the London sky, creatures smashed through the sidewalk and a tiger plodded toward onlookers. While users may not have been fooled by the stunts, they were certainly impressed and entertained. The campaign has garnered national acclaim, generating nearly 8 million views on YouTube and thousands of social media comments, shares and engagements.

Ikea has also integrated augmented reality into their customer experience. The Ikea Place app enables furniture to virtually appear in a person’s own home, giving them a preview of how the piece would look in their space before purchasing it. This foray into augmented reality is a key example of how technology can be used to ease the purchasing process and drive sales. Ikea recognized an age-old problem with furniture buying and thus provided a truly innovative solution.

Looking to the future

When executed effectively, augmented reality is a breath of fresh air for consumers inundated with print and digital advertisements. Rather than simply delivering a message, AR gives companies the opportunity to simplify processes, solve common problems and directly engage customers with their products. Customers also benefit from this exchange. Imagine virtually trying on clothes or testing a popular shade of lipstick, without having to step foot into a store. As the technology continues to develop and companies adapt to the expanded digital environment, expect the bridge between the digital world and the “real” world to magnify.

Looking for innovative marketing solutions? Give us a call and prepare for powerful results.